Skip to Main Content
It looks like you're using Internet Explorer 11 or older. This website works best with modern browsers such as the latest versions of Chrome, Firefox, Safari, and Edge. If you continue with this browser, you may see unexpected results.

A unique resource of faculty edited college student articles on the history and culture of the El Paso, Juárez, and Southern New Mexico regions.

Between 1779 and 1785, men under Spanish Field Marshal Bernardo de Gálvez opened supply lines for General George Washington’s armies by defeating the British in Baton Rouge, Mobile, Pensacola, St. Louis and Fort St. Joseph in Michigan. Galveston, Texas, is now named after him, and statues of him stand in New Orleans and Washington, D.C. 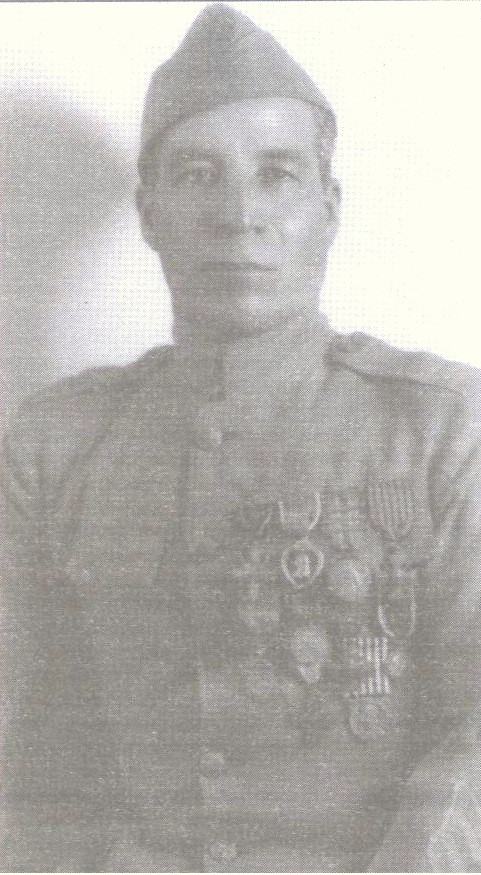 “Damn the torpedoes. Full steam ahead,” declared one famous Civil War Spaniard, David G. Farragut. He would later become the first admiral of the U.S. Navy. Estimates say that 2,500 Latinos fought for the Confederate Army and 1,000 volunteered for the Union Army.

During the Spanish-American War, several of Teddy Roosevelt’s “Rough Riders” were Hispanic, including Captain Maximiliano Luna and George Armijo, who became a member of Congress.

These men were among the earliest Latino immi­grants and citizens to have defended the United States of America throughout its history. They are called the “Quiet Force” because although they have fought in all American wars, from the Revolution to our cur­rent war in Iraq, not much is heard about these brave soldiers. During World War I, one undocumented Mexican immigrant became a hero. His name was Marcelino Serna.

Serna was born in Chihuahua City, Chihuahua, Mexico, near a mining camp on April 26, 1896. In 1916, he traveled through Juárez to El Paso in search of employment. In the United States, Serna worked in Kansas on a maintenance crew for the A. T. and S. F. Railroad, as well as the Union Pacific Railroad. Later, he worked as a farm worker in Colorado’s sugar beet fields.

Meanwhile, World War I was raging in Europe. Unable to remain neutral, the United States declared war on Germany on April 6, 1917. That year in Denver, Colorado, federal officials picked up a group of young men, Serna included, and held them until their draft status could be verified. Rather than wait, Serna volunteered for the army.

After only three weeks of training, the 20-year-old Serna was shipped to Liverpool, England. Private Serna was assigned to Company B, 355th Infantry of the 89th Division, also known as the Midwest Division because most of the soldiers hailed from Kansas, Colorado, Utah, South Dakota, New Mexico and Arizona. He was a participant in some of the most rigorous campaigns of the war, including the Lucey Sector, Puvenelle Sector, Meuse-Argonne Offensive, St. Mihiel Offensive and the Euvezin Sector.

When Serna arrived in France, his captain asked him if he wanted a discharge since his records had been straightened out, and the Army realized he was a Mexican National. Serna spoke little English at the time, just like 67 other men in his outfit, and one soldier who was bilingual translated for the soldiers. Serna, however, refused the discharge. “I told the captain I wanted to stay with my buddies, and he told me it would be OK.”

Serna’s unit began advancing towards the Meuse River and Argonne Forest. The Argonne Forest is located in northeastern France between the Meuse and Aisne Rivers. At St. Mihiel, Serna’s unit was moving in heavy rain through thick brush when a German machine gunner killed 12 soldiers.

With permission from his lieutenant, the 5-foot-6 Serna, the scout for his unit, continued onward. As he recounted to El Paso Times reporter Bill Birch in 1962, “I jumped up and ran about ten yards and then hit the dirt. I kept this up until I was in the machine gunner’s left flank. He had hit my helmet twice with bullets during this run.” Serna continued, “When I got close enough, I threw four grenades into the nest. Eight Germans came out with their hands up. Another six were in the nest dead. I held my prisoners until help arrived.”

Serna recounted an­other battle to Birch dur­ing his 1962 interview. During a second scout­ing mission at Meuse-Argonne, Serna captured 24 German soldiers with his Enfield rifle and gre­nades. “I saw a sniper walking on a trench bank and wounded him from about 200 yards away. I followed his trail into a trench and heard some German soldiers talk­ing. I saw four of them and started shooting. I got three of them.” With the rest of the Germans out, Serna changed positions often, fooling the enemy into thinking several men were attacking them.

About 45 minutes later, Serna was close enough to throw grenades at the enemy. “They ran into the dugout and I lobbed three grenades into it right behind them,” said Serna. “They came out with their hands up. I captured 24 and about 26 were killed in action. I herded them into a tight group with a .45 automatic in one hand and a Luger, which I had picked up, in the other. After a few minutes I was able to fire an SOS flare and my buddies came to help me.”

Serna told Birch that after months of combat action without a scratch, he was shot by a sniper in both legs, four days before the Armistice. Serna recalled, “I went down and that probably saved my life. ... In a little while I was able to get up and hobble toward our lines, using my rifle as a crutch.”

In a 1978 El Paso Times interview with Ramon Villalobos, Serna said he spent several months in an Army hospital in France. While he was there, Gen. John J. Pershing, Commander-in-Chief of the American Expeditionary Forces, pinned the Distinguished Service Cross on Serna. This is the second highest American combat award. Serna said that a few days later, Field Marshall Foch, Supreme Commander of the Allied troops, awarded him the French Croix de Guerre for bravery.

Serna served the remainder of his time with occupational forces in Germany. In May 1919, Marcelino Serna was discharged at Camp Bowie, Texas. Serna married and settled in El Paso. In 1924, Marcelino Serna became a U.S. citizen. He worked at the Peyton Packing Company and then became a civil service employee at Fort Bliss.

In 1960, he retired as a plumber from William Beaumont Hospital. In 1973, the Marcos V. Armijo VFW Post 2753 honored Serna with a 40-year pin for continuous membership.

During his retirement, Serna spent most of his time tending his flower garden until the family house, and others in the neighborhood, had to be removed to make way for the Chamizal Highway. He moved his family into a new residence on Buena Vista Street and continued his interest in gardening. He participated in Veteran’s Day parades for years. On Feb. 29, 1992, Private Marcelino Serna died at the age of 95.

Although someone once contacted Serna about writing a book on his war experiences, nothing came of it, nor has Hollywood taken notice. But Serna has a place in history. He joins the thousands of Latinos who have quietly served and sacrificed for their native or adopted country, the United States of America.